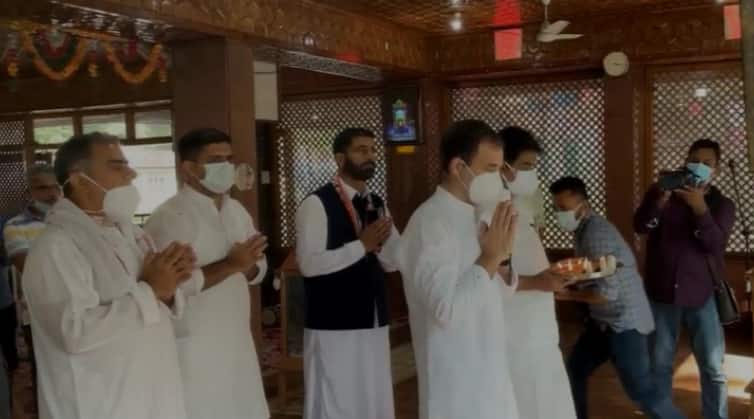 Srinagar: Congress leader Rahul Gandhi on Tuesday (August 10) arrived in Jammu and Kashmir on a two-day visit during which he will inaugurate the party’s headquarters here. Rahul Gandhi also offered prayers at Kheer Bhawani Durga Temple in Ganderbal district of central Kashmir.

Rahul Gandhi reached the temple nestled among mighty chinars in Tullamulla area of the central Kashmir district early in the morning, said an agency report. In view of the Congress leader’s visit, strict security arrangements were made.

A Congress leader told PTI that Rahul Gandhi was accompanied by the party’s general secretary organisation K C Venugopal to the famous Ragnya Devi temple popularly known as Kheer Bhawani, adding “This was a private visit. Rahul ji wanted to pay obeisance at the temple.”

Scores of party leaders and supporters were reportedly waiting outside the shrine complex to welcome the former Congress president, whoc is also scheduled to visit the Dargah Hazratbal shrine on the banks of the Dal Lake here after the visit to the temple.

The Congress MP will also inaugurate the Congress Bhawan at MA Road in the heart of the city here.